Get smart, make money on the Go! 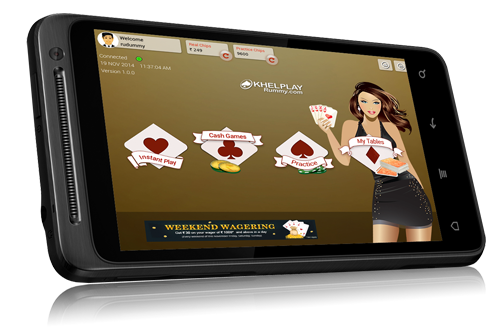 Got a smart phone, iPhone or a smart hand held computing and communication gadget like iPad or tablet, then you definitely rank among those smart people who have the opportunity to make money on the go.

Today thousands of people, using iPhone, iPad and android based smart phone and tablets have downloaded and installed KhelPlay Rummy App onto their phones and gadgets and are using it to make cool cash on the go.

The KhelPlay Rummy App is a feature rich app that allows you to play 13 cards Indian rummy on the go. The app hooks you up with thousands of other rummy enthusiast across India. All you need is an internet connection which can be achieved via data pack or Wifi. The KhelPlay Rummy app connects you directly to the KhelPlayRummy.com’s game lobby, wherein you can select the type of cash game or tournament you wish to play and subsequently join a live table to play that game and win cash prizes.

13 cards rummy is a popular card game in India and a game of skill as per the laws. Every game is unique and that is what makes rummy even more interesting and appealing. The rules are simple

You have to create a pure sequence (3 continuous cards from the same suit) and a second sequence (can have a joker) and you can create sets from the remaining cards. Check the entire rummy rules.

The KhelPlay Rummy App opens up the possibility for you to join a live cash rummy table playing on their KhelPlayRummy.com portal, thus allowing you to be a part of the big excitement even while you are traveling. This app installed on phones and tablets also free the players from the hassle PC or Laptop login when in the mood for rummy, just few taps on a touch screen and voila! You are on a table playing rummy.

A onetime free registration and verification by KhelPlay Rummy is all you need to start playing cash rummy and make money on the move. What’s even great is that existing registered user of KhelPlayRummy.com cam use the same login details to log to the app, all they need to do is download and install the app. As for new users, they can register to play cash rummy directly via app. Post verification, they can make a deposit and start to play cash rummy to win cash prizes.

The KhelPlay Rummy App is a full featured app, replicating almost all the features available on KhelPlayRummy.com. Easy deposit and withdrawal are supposed to be the two services that are most sought after by online rummy players and KhelPlay Rummy website and App is all aces in this department. Like their gaming portal, KhelPlay Rummy has made it easy for players to make a deposit or request for withdrawal thru the app, thus completing the total transaction possibility sans a PC or laptop.

For those who are still hesitant to download and use the app fearing the legal aspects; well, fear not, for playing rummy and wagering on rummy is absolutely legal in India. The Supreme Court of India has ruled – rummy as a game of skills. According to this ruling any competition where chance of success is based on the players’ skill is considered a game of skill and wagering on such a game is legal. Thus rummy, which invariable falls under the same criteria is considered as a game of skill and mere skill, and hence legal.

Easy to download and use, absolutely legal to play, KhelPlay Rummy App is a must on your phone or tablet if you are a fan of the game. As for others get smart, download the app, make money on the go.